It is a beautiful sunny morning.

I think I will mow the grass.

It’s funny what comes into your head when reading poetry. After reading Jo Shapcott’s Of Mutability I had the most vivid memory of a bedroom ceiling. It was the ceiling of the first flat I owned, in Camberwell, essentially the kitchen and scullery of an 18th century rectory.  And then the photograph of the flat fell out of The Whitsun Weddings. Tiny, and when I saw it, in the hands of the banks and looking very sad.  The fireplaces had all been boarded up by the previous landlord and nasty, smelly brown carpet throughout. The kitchen was a void without even a sink.

I have loved all the places I have lived for various reasons.  At first, I  loved this flat because of the magnolia tree in the garden, old and huge with bowl-like flowers. The garden had been carved up as so often in London conversions and I had the patch with the ancient magnolia, next door had an even more ancient mulberry. The fabric of the house went back to medieval times with wattle and daub foundations and Walter, thrillingly, said he could “feel something” …. I  never did.

I bought it by sheer fluke. I had just come back from Africa and was waiting for a bus – buying anything, much less a flat, was far from my mind. I had spent all my money on safari – my Dad had died and left me a tiny amount and I blew it all on the trip. I was living in a very expensive rented flat and wondered as I mooched around the estate agent’s window  – would that damn 36 ever arrive? – if buying would be as expensive as renting? With nothing to lose I went inside and started to chat to the woman at the desk. A dapper man breezed in and instantly said – “Enid, she looks like an Old Rectory Type”. Was this a good thing? I wondered, also to be classified so instantly was rather insulting. Anyway to cut a long story short it turns out I am an Old Rectory Type because the moment I walked in I knew I would buy it if only for the big old magnolia in the tiny garden.

The flat itself was minute – a sitting room, bedroom, kitchen and bathroom. Very dark, very tatty but with the tree in the garden, its branches tapping at the window.

Anyway weeks of hard work paid off. Ripping off the hardboard covering the fireplaces revealed beautiful Victorian fireplaces with their original tiles. I found an old German sink with brass taps in a reclamation yard and suddenly had a functioning kitchen but with no cooker for weeks until I managed to save for one. I existed on sandwiches in the interim.

The most exciting moment was walking in after the carpet had been ripped up and the floorboards sanded. Floorboards that had not seen the light of day for decades suddenly had a honey slick, so glowing and pristine so that I could hardly bear to walk on them. And after that the tiny flat became home. I found a wardrobe in a junk shop that just fitted its alcove, some ancient linen curtains looked just at home and I painted the bedroom ceiling cerulean blue and hung a kitsch old lantern. I woke up to a warm blue glow every morning. Most of the end wall of the bedroom was taken up by ancient rattling sash windows –  so cold in the winter with an icy draught whistling round my head.

The sitting room was the old scullery with a stone slab where the old washing copper would once have stood.  I painted one wall a pale, jonquil yellow and another a dark, shiny aubergine. Another rattly sash window and a door into the garden. I found it very easy to be happy in that tiny flat. Dark summer London evenings with the Proms on the radio and my legs dangling over the side of the minute two-seater sofa. It is hard to describe that solitary happiness, alone in the warm summer night with the faint sound of sirens carrying on the warm air, it was like living in a music box. 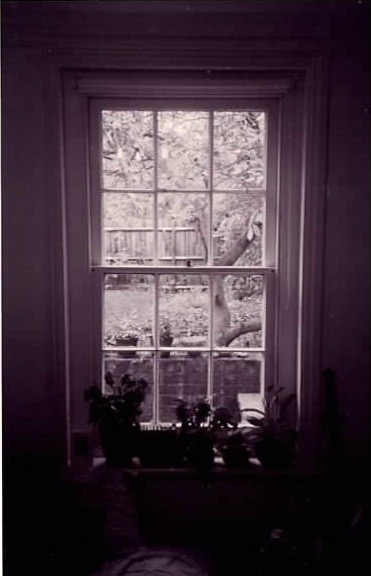 Published by The Creekside Hermit

View all posts by The Creekside Hermit