I woke up feeling head-achy and very tired yesterday and immediately thought “oh-oh” … as I suppose everyone is if they get the merest sniffle nowadays. I feel I have been shaking something off for weeks now but so far so good. Took it very easy yesterday.

In the morning I finished off my Arts Council funding application and then watched Call My Agent all afternoon – Juliette Binoche was in the Cannes episode – apparently they are all fighting to be in it now. Luckily, I had already made a veg curry to which I only had to add coconut milk so did not have to cook.

I was very late in posting my quotidian poem and just as I had and was going to bed the lights suddenly went out.

Pitch black. I had forgotten how dark it is when there is really no artificial light. I have a torch in my understairs cupboard for just such an emergency but for some reason it wouldn’t switch on. Damn! Then I realised I was trying to switch on my iron. The relief when I found the torch. Spent a few moments staggering around trying to find matches and candles and lit a few and I must admit it was lovely.

It was a bright, starlit night so I went outside to have a look at the sky. It was clear and cloudless and the stars seemed very close to earth – fizzing in the night sky. The North Star, huge and glowing, surrounded by a necklace of tiny constellations, sharp pinpricks in the darkness. A scintilla of red in the far, far distance – could it be Mars? Silence except for the neighbourhood dogs barking in excitement and an occasional bleating sheep. The cows were silent for a change. There is so much light pollution now, even in the depths of the Irish countryside. I have no idea about the stars and resolved to find out more, maybe buy a telescope. I thought of my poem for the day and though how strange that these very constellations shone down on the  battlefields of Troy and then on Homer, 15 centuries ago. London was far away in the silence under the indifferent, bright stars.

I went to bed in candlelight and tried, in vain, to read by candlelight. The romance instantly disappeared from the situation. How boring it must have been to have to live like this, especially during the long, dark winter nights. Storytelling must have been essential and I thought of Homer again and of people sitting around fires through the long centuries listening to his poem. Then all of a sudden the lights in my bedroom came on! Hurrah!

Today, even though I woke up with another headache, I feel much better. After tea and poetry I went into the garden to mow the paths around my trees. I am going to plant grass seed and, great excitement, the wildflower seeds are on their way! I mistakenly calculated the area I would be planting by some fantastic amount – 600 square metres!! It is not even a quarter that size so luckily the initial bill of €189 has come down a bit. Very excited to see what comes up. They are all native wildflowers cultivated by a Mr Sandro Cafolla in Carlow.

Off to carry on mowing and to scatter my grass seeds. 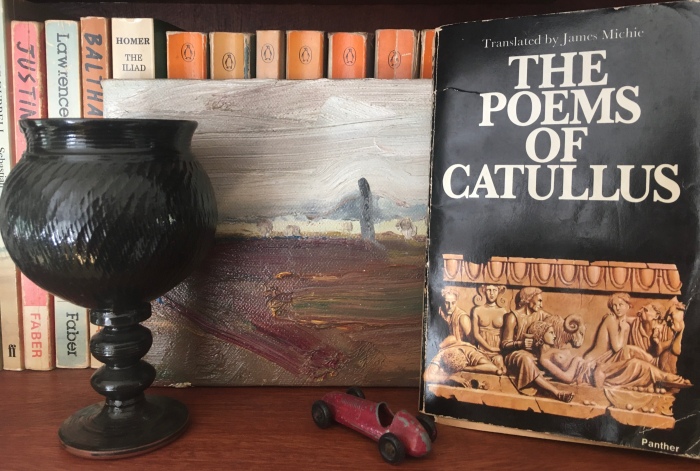 The yacht you see there, friends, says that she’s been
The fastest piece of timber ever seen;
She swears that once she could have overhauled
All rival boats, whether the challenge called
For racing under canvas or with oars.
And she can cite good witnesses – the shores
Of the terrible Adriatic, the wild seas
Off famous Rhodes, the island Cyclades,
Thrace’s Propontis and the savage bays
Of Pontus, on whose heights, in the old days
When she was still a yacht-to-be, she stood
And whispered with her leaves as a green wood
And, boxtree-clothed Cytorus, so do you,
My yacht maintains, remembering that the copse
That bore and raised her was your own hill-top’s,
That in your waves she dipped her first oar-blade
And then through mobs of violent seas conveyed
Her master safely, whether the wind played
A port of starboard tune, or Jove’s fair weather
Fell square astern and stretched both sheets together;
Yet never had to make a single vow
To the shore gods all the way, to where she now
Rides the transparent lake at anchorage.
But these are memories. Now, in her old age,
Retired to this calm haven, she devotes
Her prow to the Heavenly Twins, patrons of boats.

The Poems of Catullus